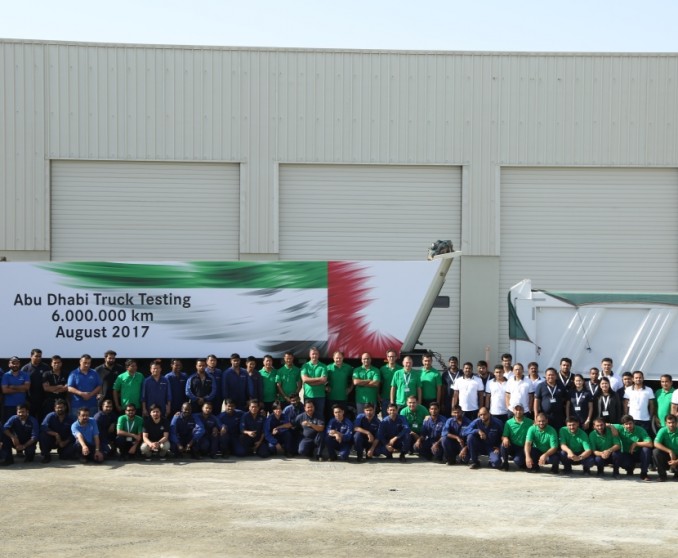 The world-class facility is the only one of its kind in the region and has been operating for three years. It tests EMC’s heavy duty vehicles against all conditions, including the extreme high temperature and sandy environments which are so prevalent in the region.

The purpose-built facility at EMC’s Commercial Vehicles in Mussafah is one of 11 Daimler specialist test centers spread throughout the globe. What is unique about the Abu Dhabi location is that it is capable of testing the trucks at heavier loads and hotter ambient conditions than any other facility.

Reaching highs of 45 degrees and 100% humidity, the climate in the UAE is a stress test for the engine and vehicle. This facility enables Mercedes-Benz trucks to be tested against the most challenging desert conditions to ensure that they are safe and durable when travelling long distances.

Emirates Motor Company (EMC), is the authorized Mercedes-Benz distributor in Abu Dhabi and flagship company of ALFAHIM. The family firm has a long and proud heritage in the capital and the launch of this facility is in line with ALFAHIM’s core values of Commitment and Diligence to its business unit’s stakeholders in the region. The official opening of the facility took place In Mussafah on August 28th as EMC Commercial Vehicles General Manager Bilal AlRibi welcomed VIP guests.

The Head of the Testing Program for Mercedes-Benz AG from Germany, Dr. Wolfgang Sladek said “We really do appreciate the testing cooperation with EMC, here in Abu Dhabi, since this location provides extreme ambient conditions and allows for high gross vehicle weights. That combination puts a lot of load on both our powertrain and the entire vehicle which helps us find any possible weak spots fast to provide our customers with premium quality. In addition to the location, it is also the people that make this a success. We get really great support from EMC in everything we need.”

Bilal AlRibi said: “This is important to our customers as it gives them the reassurance that our trucks have faced the highest standards of testing possible. This allows us to make sure that only high-quality products reach our customers.”

AlRibi continued. “The total travel distance with the test fleet has recently reached a 6,000,000km mark, which demonstrates the level of testing it has gone through and the positive effect it had on the vehicle.”