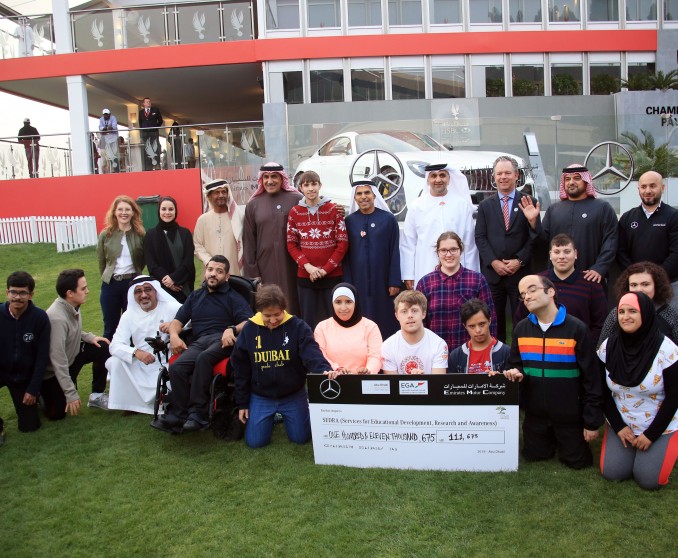 24/01/2018, Abu Dhabi: - 111,675 AED was donated to SEDRA Foundation for the Inclusion of People of Determination at the conclusion of the Abu Dhabi HSBC World Championship presented by EGA yesterday, thanks to the incredible skills of the world’s best golfers and three generous tournament sponsors.

Emirates Motor Company (EMC), the authorised Mercedes-Benz distributor in Abu Dhabi and the flagship company of ALFAHIM, in collaboration with Emirates Global Aluminum (EGA) and Abu Dhabi Sports Council (ADSC), pledged 75AED to SEDRA Foundation for each birdie scored during the four-day tournament.

With the players accumulating an incredible 1,489 birdies, 111,675 AED was donated in total to the non-profit foundation to establish a much needed after school initiative promoting sports and active lifestyles for young adults with disabilities. The funds were donated at the ceremony in Abu Dhabi on Sunday night following the exciting conclusion of the tournament.

General Secretary of ADSC, HE Aref Hamad Al Awani said: “We at ADSC, through various sport events, give all due care and attention to support the culture of charitable and humanitarian initiatives and deeds - especially this year (the Year of Zayed) as it is dedicated to giving and charitable works, and to help targeted segments of the community.”

Al Awani also lauded the great role of all partners of Abu Dhabi HSBC Championship, presented by EGA, and their keenness to support this initiative which has achieved its goal and also hosted a large number of persons with special needs at the final day of Abu Dhabi HSBC championship

Reem Mohammed Al Fahim, CEO of SEDRA Foundation, said: “We are grateful to EMC, ADSC and EGA for their continued support. The proceeds will support the Leaderships vision for more healthy, active and happy people with disabilities in the UAE. SEDRA, as a Legacy Partner of the Special Olympics World Games are invested in making sports more available to all. I hope that this will inspire more organisations and community members to join the inclusion movement at any capacity”