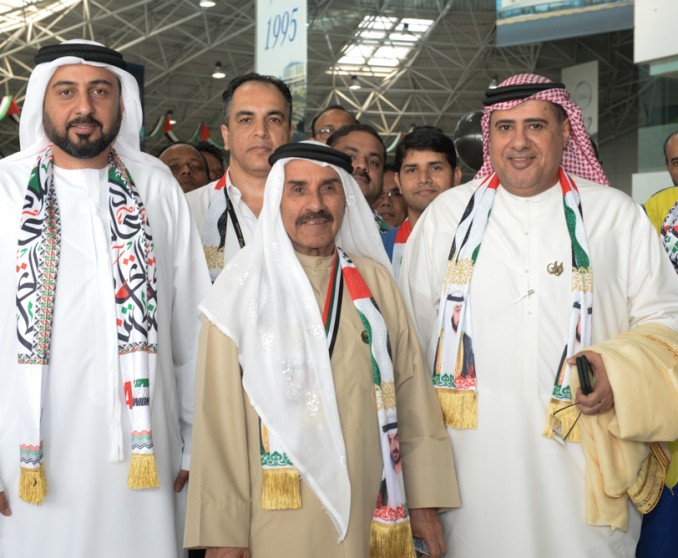 A month of extra special UAE festivities culminated in a wonderful day of Emirati-themed celebrations as ALFAHIM brought together Al Fahim family members, employees and customers together to mark the nation’s 46th National Day.

As one of the UAE’s most successful family businesses, with a proud history stretching back 59 years, ALFAHIM has shared in the growth and success of the nation and was keen to show its core value of Commitment to the UAE during such a poignant time of year, while also eager for all its staff of all nationalities to join in the celebrations.

The finale of the UAE National Month saw a fantastic display of Emirati heritage and festivities, brought in by Emirati employees working in three locations simultaneously: Abu Dhabi, Al Ain and Dubai - on Tuesday, November 28.

The grand event included traditional folk-dancing, a blast from the past ‘dokana’ booths, pictures of the UAE before and now, and falconry displays brought in by nationals in the organization, as well as a traditional Emirati cuisine served in a majlis setting.

Scarves in the colours of the UAE flag as well as special commemorative pins and 46th National Day car stickers were distributed as part of the event, held a few days before the official nationwide celebrations on Saturday, December 2.

Mr. Ahmed Abdul Jalil Al Fahim, Chairman of ALFAHIM, said: “UAE National Month was a fantastic opportunity for ALFAHIM’s employees and customers to come together to celebrate the heritage and achievements of the UAE.

“Our Emirati committee was determined to make this year’s 46th Spirit of the Union a special one for all employees and visiting customers from diverse backgrounds. They have been working hard to show our appreciation to the nation, while allowing our customers and employees to experience the traditions we inherited from our forefathers in a warm and hospitable Emirati ambience.”

The Abu Dhabi based conglomerate’s various businesses, each took part in the UAE National Month Campaign throughout the month of November including: